Harpist ~ Performer ~ Composer ~ Author ~ Educator ~ Mystic
Internationally renowned harp educator Christina Tourin is one of the most accomplished harpists of her generation, delighting audiences with her performances worldwide, since the age of eight. 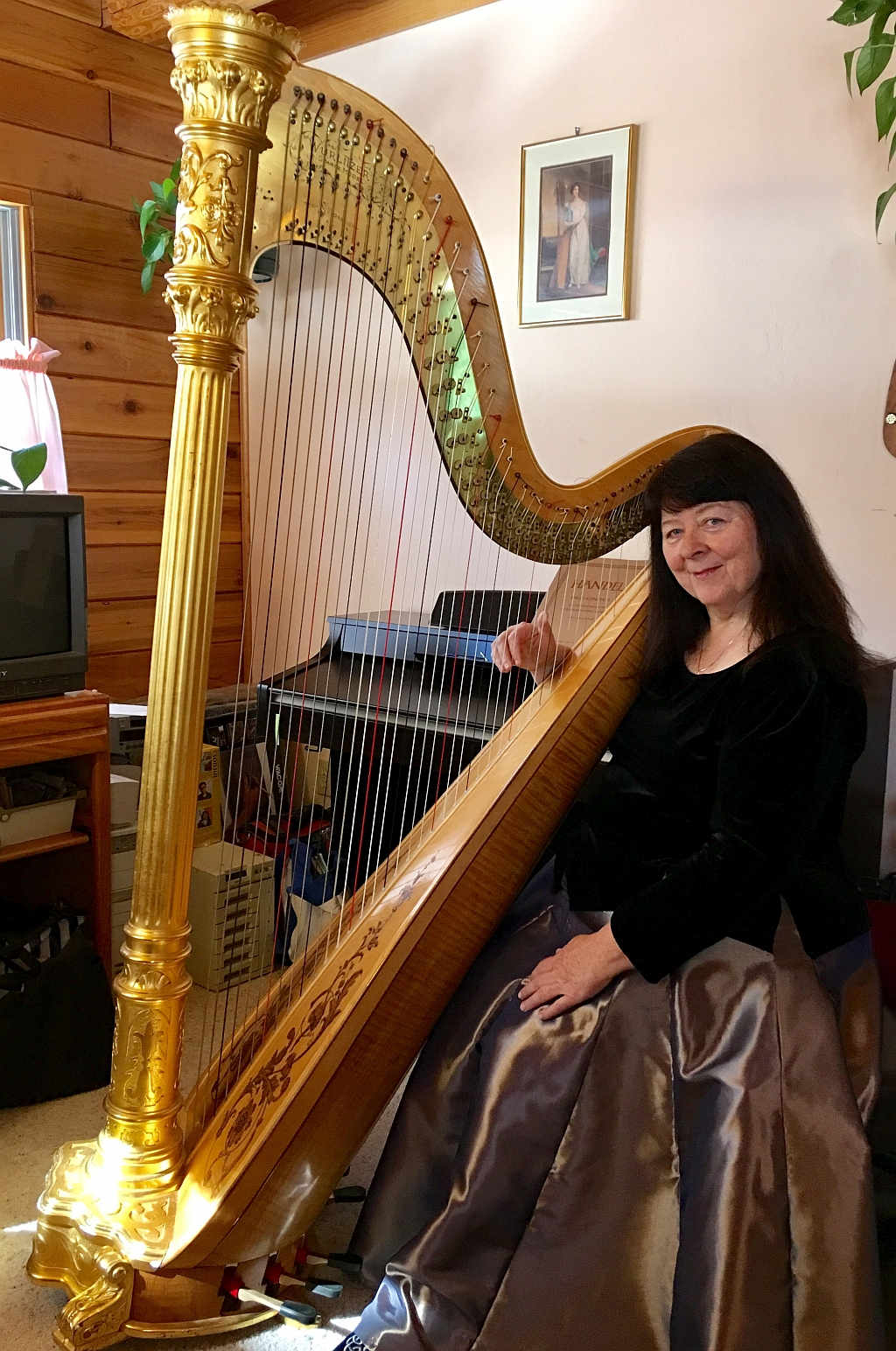 Christina Tourin is praised for bringing thousands of people to the harp through her workshop organizational skills; for introducing the modes into harp education/performance in the early 1970’s; and instrumental in developing the small interactive small therapy harp into the harp building world with Harold Westover.
As one of the foremost leading educators of the harp, she excels in her ability to combine harp history, culture, science and spirituality into her teaching and has educated multitudes of harp students through her signature programs, Creative Harping©, Rainbow of Sound™ and Color My World© plus private teaching for the past 50 years!
Christina is a Therapeutic Musician (TMus) and Music Therapist (MT) having studied under the tutelage of Barbara Crowe at Arizona State University. Her main focus is CONVERGENCE – bringing together all those who use music, sound and the arts for enrichment and well-being.
Author of the respected and comprehensive book, A Cradle of Sound-Harp Therapy Manual, she is the founder and director of the International Harp Therapy Program. She has 15 recordings distributed internationally and has performed extensively worldwide.

Christina is a Second Generation
Harpist

She began playing harp at the age of four. She received Music and Education degrees from the University of Vermont and also studied harp at the Mozarteum in Salzburg, Austria and at McGill University in Montreal.

After her studies in Counseling/Psychology at the University of Vermont and training in Resonant Kinesiology under the tutelage of Susan Borg, she continued on to receive her Music Therapy training at Arizona State University under the directorship of Barbara Crowe.
As an International recording and touring artist, she has concertized extensively. She is an active workshop organizer and has been instrumental in the revival of the folk harp since the early 1970″s. In 1982 she founded the Scottish Harp Society of America and is the Founder and Director of theInternational Harp Therapy Program established in 1994. Healing with sound, working in hospitals and hospices, the labyrinth, composing, teaching, and writing books round out her full life.

“One who kisses the joy as it flies, lives in Eternity’s sunrise.”

Christina Ruth Cooper Tourin grew up in the gentle rolling hills in Maine. She began her life listening to the beautiful sounds of her mother”s golden concert harp.
Her mother, Ruth Hersey Cooper, studied music with Marcel Grandjany, the grand master of the harp at the Juilliard School of Music in New York before settling in Maine.
It was not long before little “Tina” would sit on her highchair and start playing tunes of her own. Her life was full of Ravel and Debussy and she danced to the beautiful melodies that her mother played. Sounds rang forth also from her grandmother’s piano playing and the students that came for lessons.

By age 8, Christina was performing frequently on YOUTH CAVALCADE, a television show in Portland, Maine.
At age 11, her father, Donald MacKay Cooper, changed jobs and the family, (Tina with her two younger brothers), moved to Branford, Connecticut. During her teenage years she and her mother were active in the American Harp Society and performed at numerous recitals throughout the Southern Connecticut area.
Christina began playing in trio ensembles at Yale University and performed with various orchestras and off-Broadway shows around the New Haven area.
After leaving Connecticut she enrolled in the University of Vermont, studied Elementary and Music Education and received her B.S. degrees in 1982. In 1974 she was chosen to attend the Mozarteum in Salzburg, Austria for study under Marianne Oberascher. Upon returning to Vermont, she became the harpist with the Vermont Symphony, the Vermont Philharmonic and continued her harp studies by traveling to McGill University each weekend.

It was in 1975 that she first became interested in the small Celtic harp after traveling to Scotland and meeting harpmaker Ian Firth. Upon her return she was led to Robbie Robinson in Mt. Laguna, California who is known to be the father of the Folk Harp Revival in the United States. Christina became the east coast coordinator of the Folk Harp Society and continues to be active in the Society which is now the International Society of Folk Harpers and Craftsmen.
Meeting early music instrument maker, Peter Tourin, she soon became proficient and knowledgeable in the art of harp building and crafted 75 Celtic and Renaissance harps.

During the years that they spent together, she delved into Historical Harps; studying Medieval, Renaissance and Baroque Style as well as Celtic Music. Their sons, Mischa and Jaime showed an interest in music at young ages. Now as young men, Jaime is the CEO of MauiTempehCo.com and also a fine sushi chef. He lives on the island of Maui with his two beautiful children. Mischa is a wilderness therapy survival guide for young adults finding their way in the world.

Mischa spent a year teaching English in Japan and is an avid rock climber. They both enjoying making music with stringed instruments. Four generations of a musical family are now becoming five – from Christina”s grandmother, to mother, to her, to her sons and now to her

grandchildren! Picture are: Jude Koa Tourin, Mischa Tourin, Jaime Tourin, Christina with Mischa and Jaime with son, Jude!
In 1979, a very historical event took place in Duxbury, Vermont that Christina organized. It was one of the very first workshop gatherings for the Revival of the Folk harp in the country.

Derek Bell of the Chieftains and Roslyn Rensch, noted historian of the book, titled The Harp were invited to lecture to the group.
In 1982, Christina founded the Scottish Harp Society of America, at the request of Dr. Herb MacNeil, (Founder of the Scottish Clan Society of America). The Society quickly grew from three people in Vermont reaching out to over 8,000 people throughout the U.S., Canada and Britain. Through the summers of 1982-1989, Tina organized the Scottish Harp Course at Oberlin College where teachers, Alison Kinnaird, Sile Harris, Patsy Seddon, Mary MacMaster, Anne MacDearmid, Chris Caswell, Sue Richards, Kim Robertson and she would teach on the various aspects of Scottish Harping. Competitions sprang forth at Highland Games throughout the country and Christina continues to this day to adjudicate at these events.
Changes came over time as Christina devoted more time creating her own compositions. Collaborating with friends, Kim Robertson and William Jackson, her first celebrated album, White Rose, made its debut in 1991.
Her second album, Starlight, features the group Aletris, flautist Karen Kevra, and cellist Judith Hitt.
Christina's Gallery
Go to Top
0
0
Your Cart
Your cart is emptyReturn to Shop
Continue Shopping